Dead Sea Treatments
“The Dead Sea has been blessed with a rare blend of potent natural resources proven by endless scientific researches worldwide to be therapeutically effective for healing skin diseases. People from all over the world come to the Dead Sea where the most advanced methods and best therapists for treatment of skin conditions, especially psoriasis, are concentrated. The therapeutic qualities of the Dead Sea minerals have been researched for over a century. The clinical results of these studies show that treatment at the Dead Sea is the healthiest, most effective available for Psoriasis today.

A few words about Psoriasis – It is a chronic, auto-immune skin disease in which the body’s immune system attacks it instead of protecting it. Psoriasis is a hereditary disease highly-common in the FaroeIslands off the coast of Denmark, where it appears in 2.5% of the population. In contrast, Eskimos and “pure” North American Indians do not suffer from Psoriasis at all.

Symptoms of the Psoriasis are redness and silvery scaling of the skin caused by a accelerated division of the epidermis cells (the top skin layer), and it can also be accompanied by intense irritation and itching. Psoriasis affects the skin, nails and may appear on the tongue and lips as well.

Long-term studies conducted for over the past 30 years show that 60% of the visitors at the Dead Sea were completely cured from all Psoriasis symptoms and an additional 36% showed significant improvement in the skin’s condition and a relief from the characteristic symptoms of the disease. The unique combination of exposure to the sun, bathing in the Dead Sea salt and Dead Sea mud baths have transformed the Dead Sea area into the most natural health resort for Psoriasis and other skin diseases, in the world. 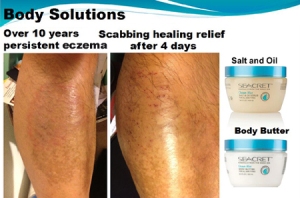 Sun and the Atmosphere
At the Dead Sea, the lowest place in the world the air is saturated with Bromine and other metals that filter sun radiation. The long sun rays that penetrate through this filter do not cause sunburn. Additionally, the air has 5% higher levels of oxygen than at sea level. The unique combination of exposure to the sun and oxygen is essential to the healing process – it reduces the stress levels and enables longer exposure to the sun. The process of exposure to the sun is gradual and supervised.

Dead Sea Water
The Dead Sea water is rich in minerals and ten times saltier than any other sea. Each liter of water contains 345 grams of Dead Sea minerals salt. Dead Sea Minerals such as Magnesium, Potassium and Calcium help heal Psoriasis. Additionally, each of the 21 minerals found in the Dead Sea is vital for the skin’s normal metabolism extending the treatment benefits, and making it applicable for all skin diseases.

Dead Sea Mud
The Dead Sea mud produced from the Dead Sea is rich in minerals which have antiseptic qualities. Covering the body in Dead Sea mud helps the minerals absorb into the body while the top layer of skin is purified and cleansed, contributing significantly to an improvement in the external symptoms of the disease.

Research Results
Over the past two decades many studies have been conducted researching the therapeutic effects of the Dead Sea on Psoriasis. The amazing results, received by different researches, show a success rate of 60% to absolute recovery. The balance 36% experienced almost complete recovery and a significant improvement in the severity of the disease during the 6 months following the treatment at the Dead Sea.

Beyond the significant success results, these studies also showed that the skin does not develop resistance to the Dead Sea treatments (as happens with the standard cortisone treatment), indicating that the treatment can be repeated with an identical success rate as the previous ones.” – Seacret Direct

What we recommend to use for your Eczema & Psoriasis…

Bundle & Save! Bundle & Save up to 60%! Pick three of your favorite products starting at $59.97 on YOUR schedule, at your doorstep. 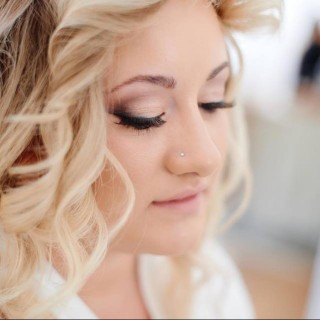 After graduating from Manhattanville College in 2009 with her Bachelors Degree in Business Management Nikki started a full-time job in the corporate world at an entry level position. The economy was at its worst and she was lucky to even have found a position with the increasing unemployment rate. She felt the pressure with every student loan notice she received in the mail. After eight months Nikki new she couldn't survive on just an entry level pay check and made her move into the beauty & airbrush tanning industry. Knowing the financial risks Nikki knew in her heart that she had to move forward towards a life that she had always dreamed of. She knew she had to rise above this economic crisis. Nikki is a trained airbrush technician. She is a Certified Technician through Norvell University. Nikki has been airbrush tanning since 2007 & is increasing her knowledge of the business & her experience as an airbrush technician with every year that passes. Nikki takes pride in her business and wants to make sure that every experience at Sun Kissed Glow is a great one! Nikki has airbrushed tan a wide varity of people including pop star Christina Aguilera. Nikki has airbrush tanned at locations in New York, Connecticut and New Jersey.